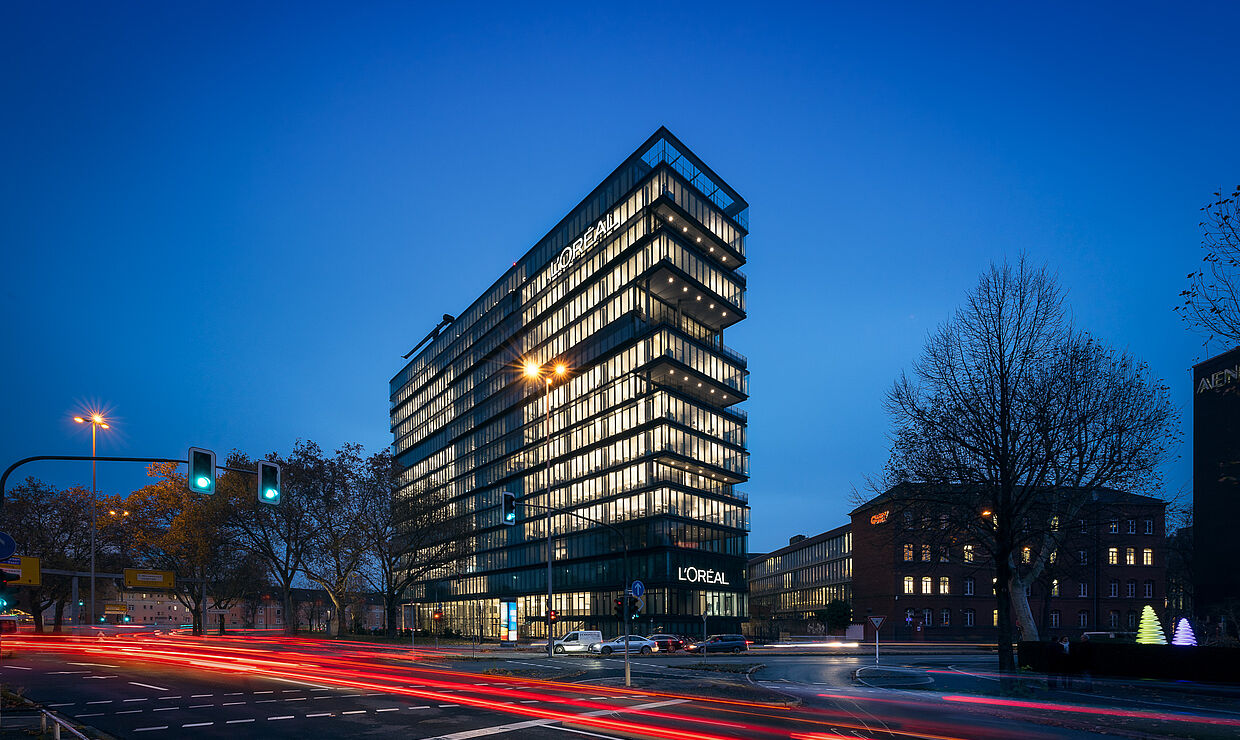 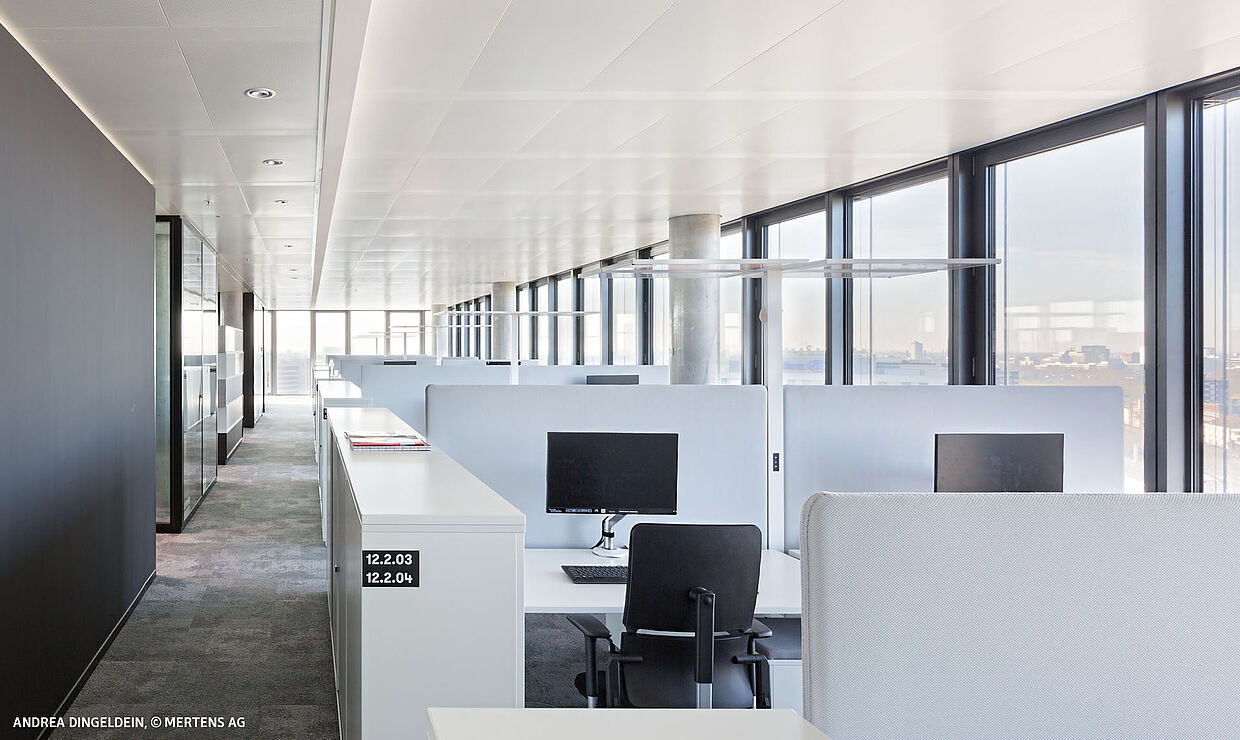 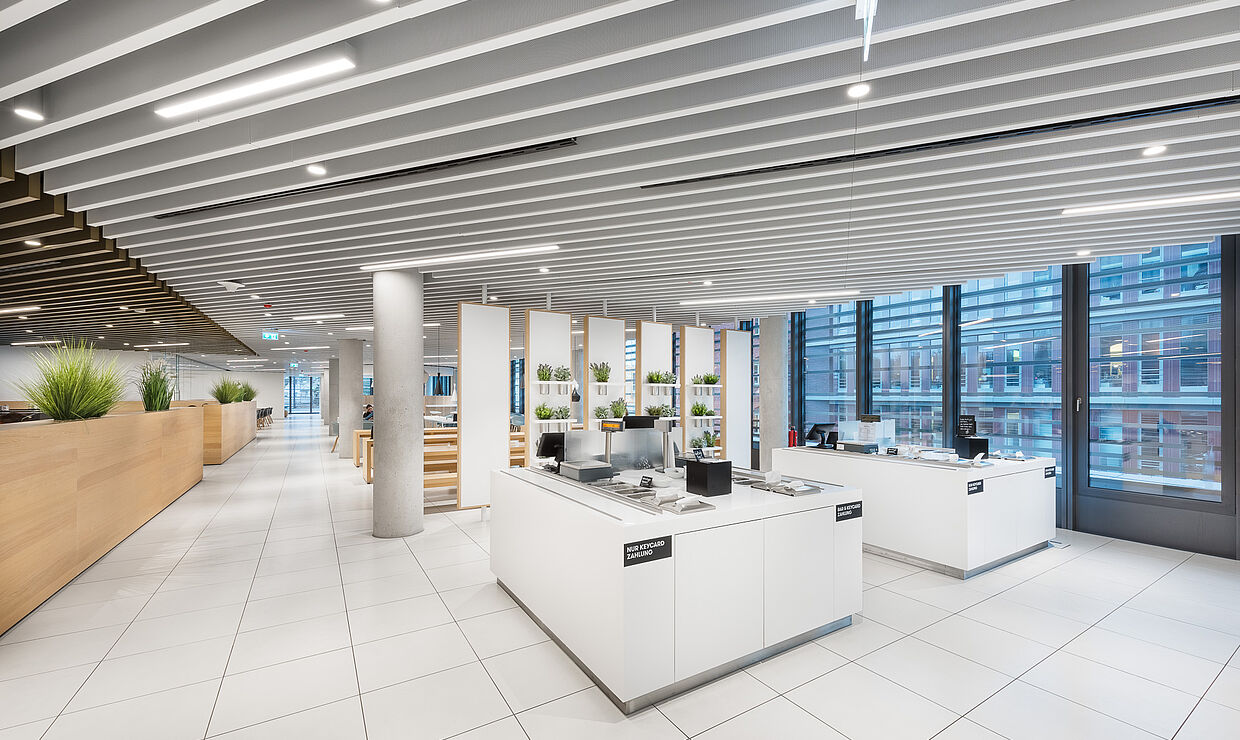 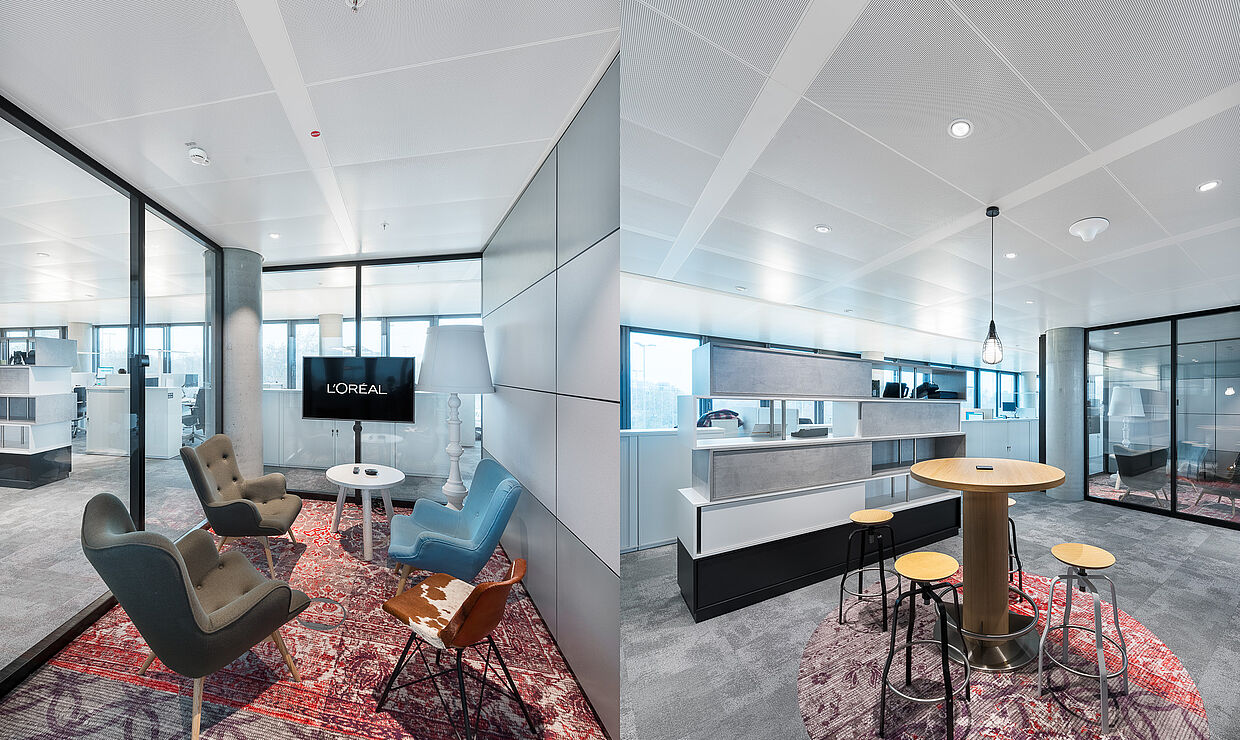 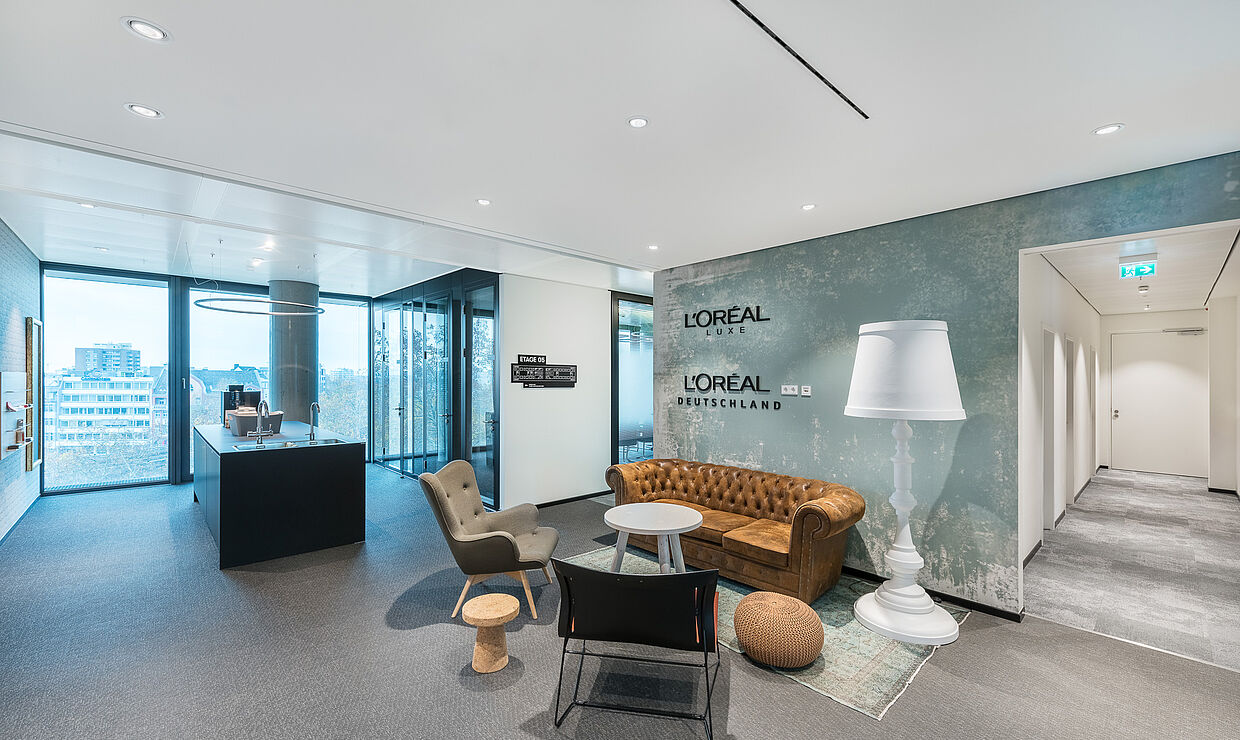 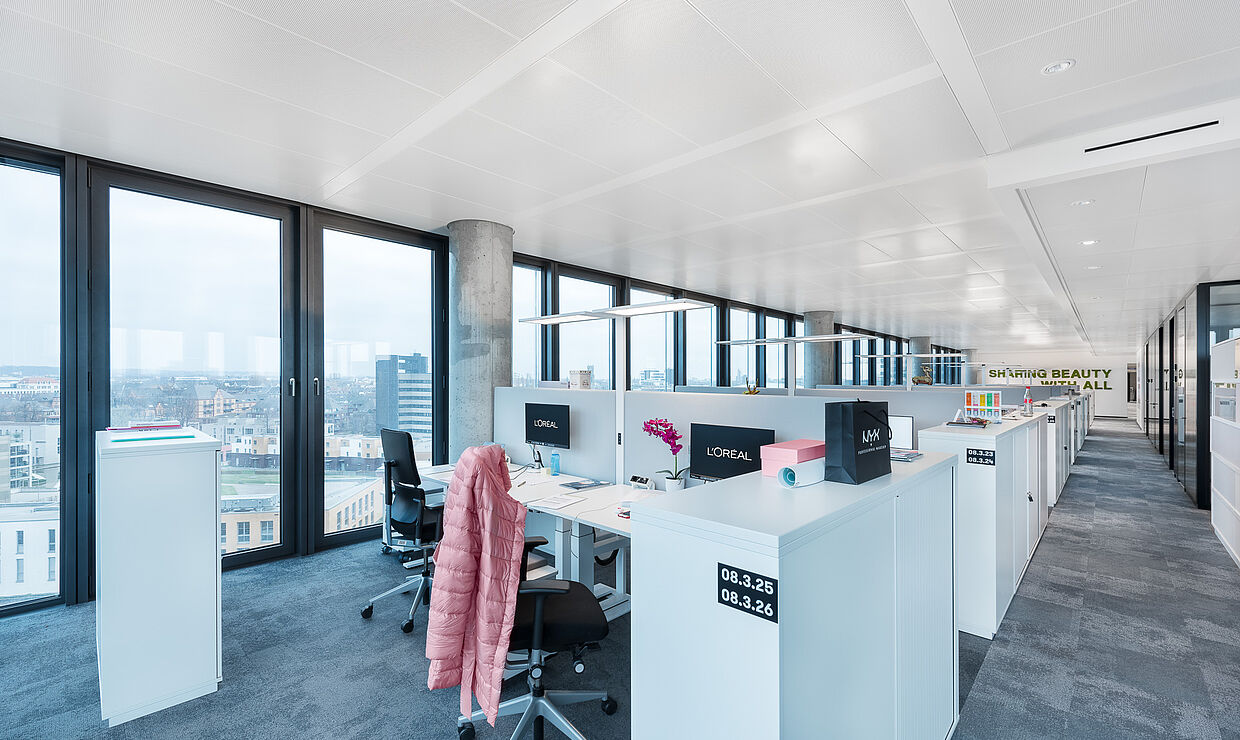 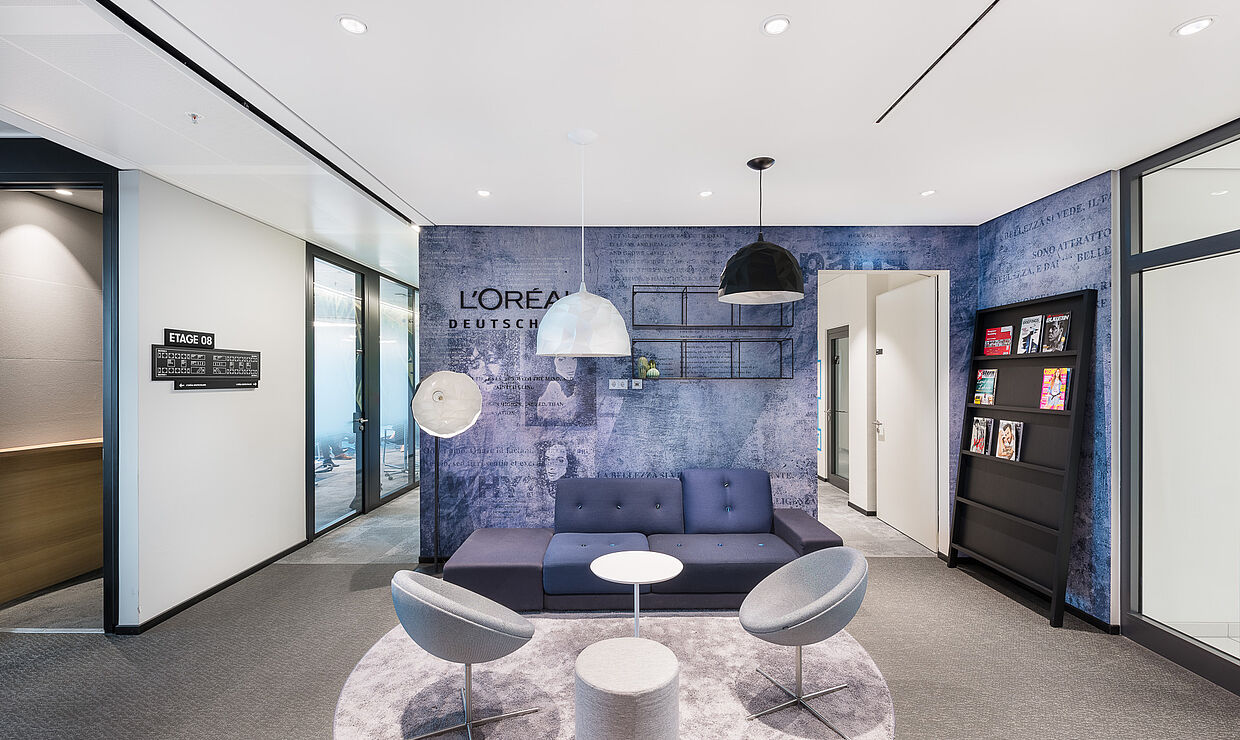 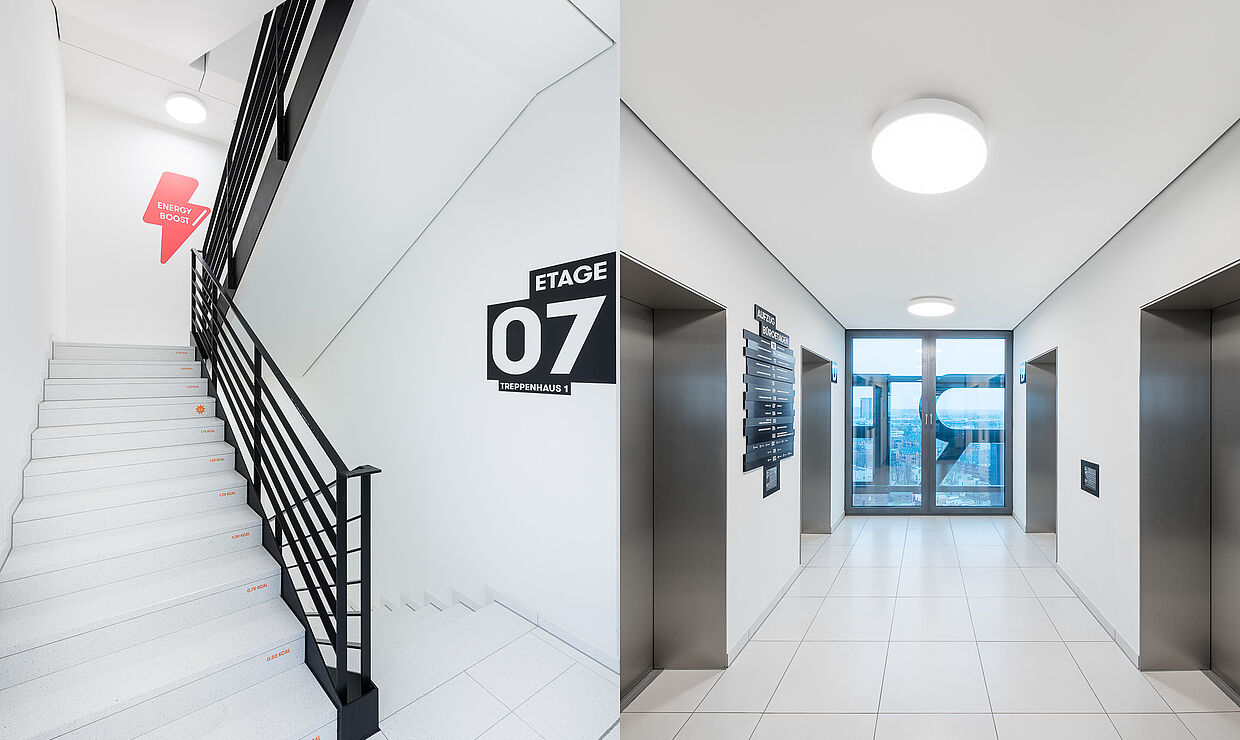 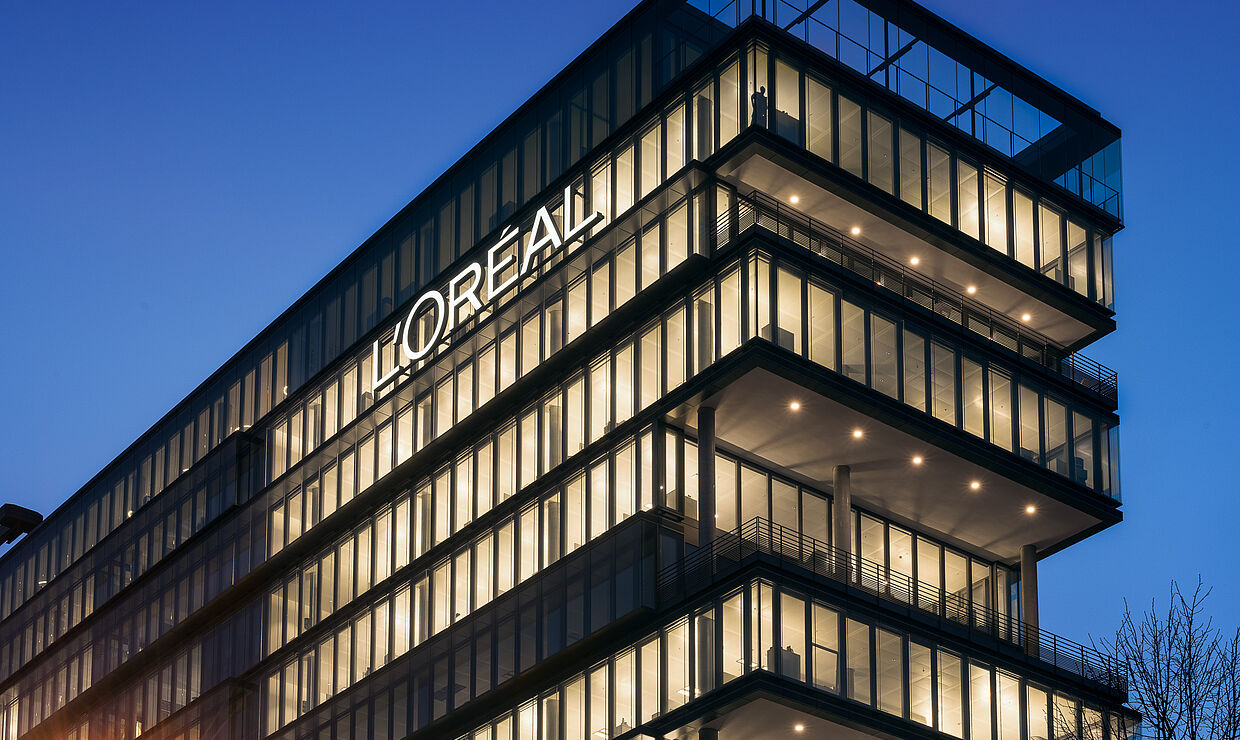 The new German head office of the cosmetics group, L’Oréal, is seen as a showcase project in North Rhine-Westphalia. It was therefore honoured with an NRW.INVEST Award in 2019. The architecture, workplace culture and lighting concept are perfectly coordinated. Open space offices, individually designed reception and communication areas as well as a generous staff restaurant create a modern working environment. Regent Lighting supplied the infrastructure and office lighting from a single source.

The Horizon office building rented by L’Oréal on the prestigious Kennedydamm in Düsseldorf stands for transparency and new perspectives. This is demonstrated in the architectural design by HPP Architekten, which features horizontal shifts and overhangs of the floors, giving the façade a relief effect. A double façade made of glass provides the acoustic screening. Around 1,000 employees of L’Oréal Germany enjoy an attractively arranged workplace here, designed to give them a feeling of well-being. For most of them it was a step into a modern open space environment.

The builder was responsible for the glass walls, floor coverings and permanently installed lighting. The furnishings were chosen by L’Oréal itself. The decision to install freestanding luminaires in the office areas was taken by the builder together with the tenant. “The cosmetics group attached great importance to optically appealing, shielded lighting, whilst fully complying with the applicable standards,” explains Ulrich Hartard, a member of the executive board of die developer GmbH. The Lightpad LED freestanding luminaires were awarded the job due to the best cost/benefit configuration. With 4 luminaire heads, they enable workstations with four desks to be uniformly illuminated. Due to the double asymmetric light distribution developed by Regent Lighting, the brightest area is always at the centre of the desk, even though the luminaires are located laterally. This applies to every type of configuration from single person to four person workstations. With a UGR value < 19 and a maximum light density < 3,000cd/m², optimal and normative protection against both direct and reflected glare is ensured in every respect. Because the luminaire heads are particularly flat, the Lightpad offers a modern design and discreet appearance – also in its external effect through the glass façade during the dark months of the year. For the best possible customisation of any workplace, the freestanding luminaires each feature a daylight sensor and presence detector per luminaire head. As part of the SensoDim light management system, there is a fully automatic control unit. In addition, the staff have the option of individually setting and saving the required brightness via a control panel in the stand. The selected value is then kept constant depending on a person’s presence and the daylight.

As the office areas, with the exception of the walkways, are only illuminated by the freestanding luminaires, the developer opted in addition for the ALONEatWORK communications module also developed by Regent Lighting. The luminaires are automatically networked via a wireless, optoelectric communication system as soon as the modules are placed on the luminaires using plug & play, thus providing a surrounding area illuminated in compliance with standards, even if only a few members of staff are present.

The staff restaurant was deliberately designed with generous dimensions – also as a pleasant space for conversations and meetings. “The tenant’s high requirements of the acoustics had to be combined with the lighting concept,” says Ulrich Hartard describing the challenge. That is why all luminaires have been positioned with the bottom edge flush between acoustic baffles. Besides cylindrical pendant luminaires as a custom-made product, which look like recessed downlights, Slash LED pendant luminaires impress with their shadow-free lines of light and timeless design.

Recessed downlights provide an optimal lighting effect in the reception, communication and circulation areas in the centre of the building. The downlights from the Prestige FIX and Prestige CARDA range fit discreetly into the ceilings. The corridors in the core areas are equipped with Slash LED light lines – also to thereby achieve an attractive external effect at night. On the staircase and in the elevator lobbies, Solo Slims with a frame height of only 53 mm appear to float on the ceilings by means of a narrow shadow joint. At the same time, the slim ceiling mounted luminaires provide an extremely homogeneous light with ultimate efficiency.
Projektübersichtfile, 13 MB
Used products
To overview
Are you planning a similar project just now?Just contact us, we'll be glad to answer your questions.