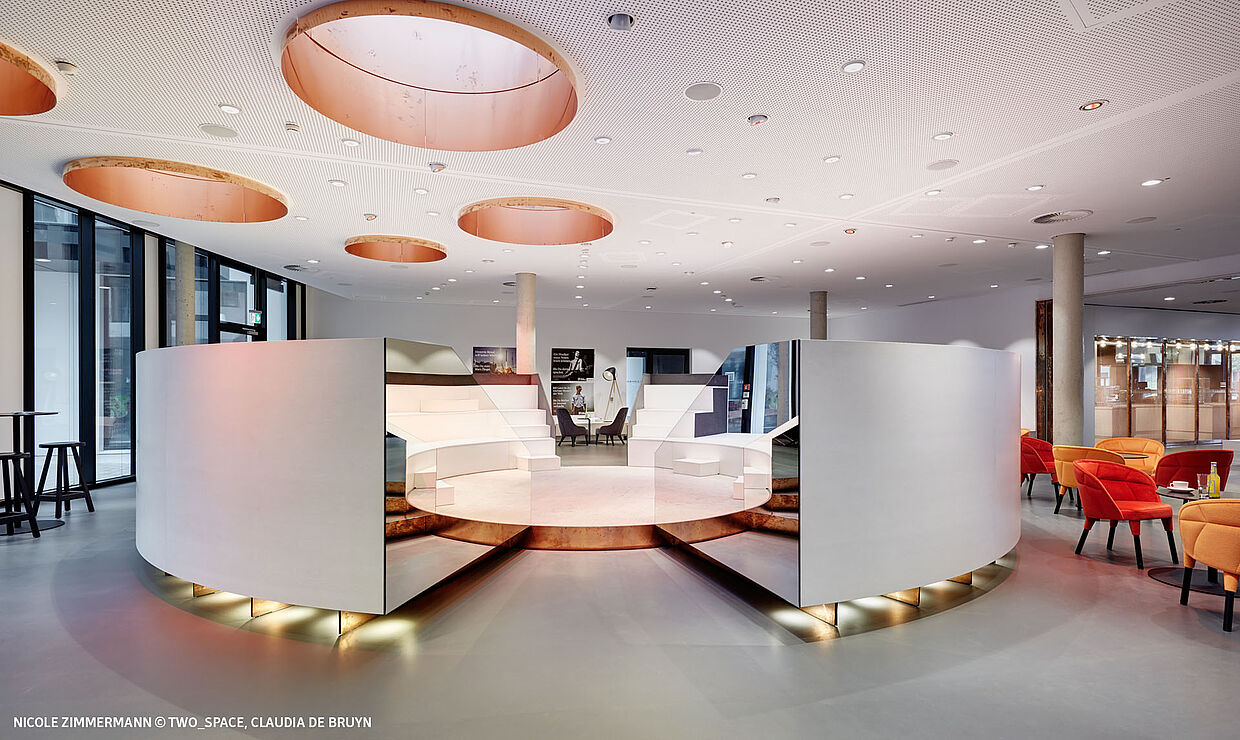 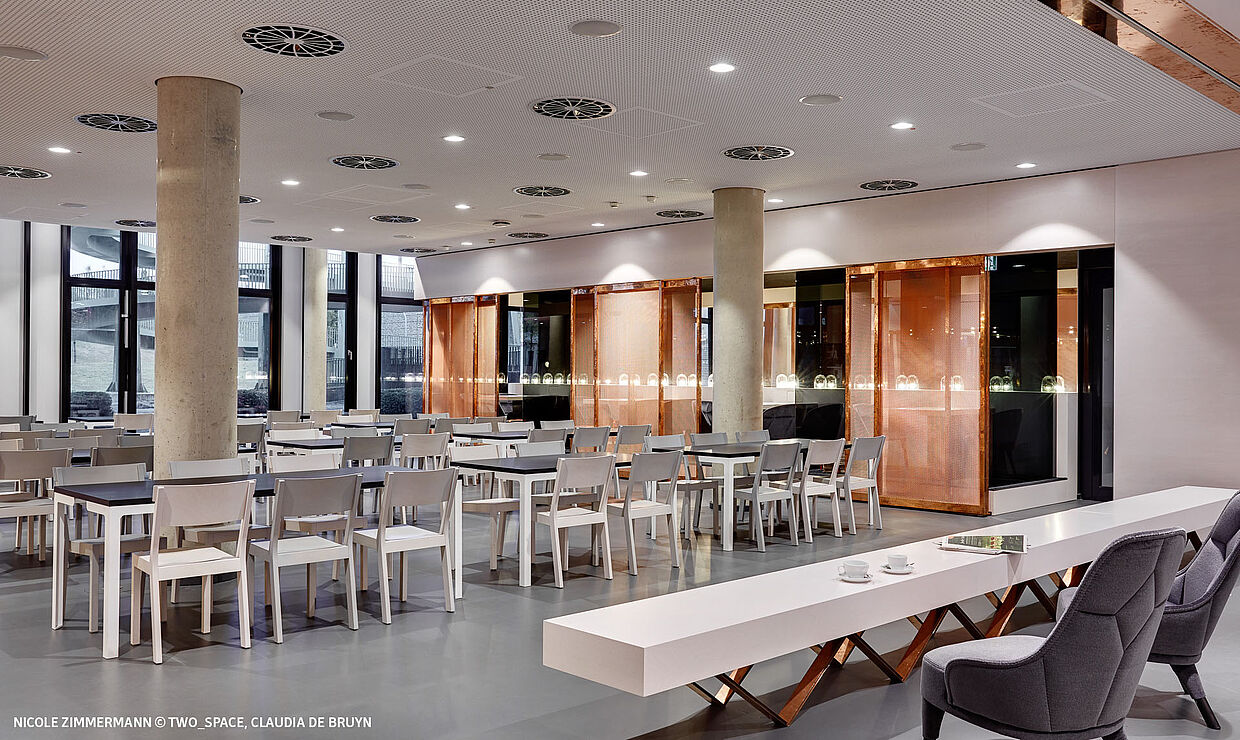 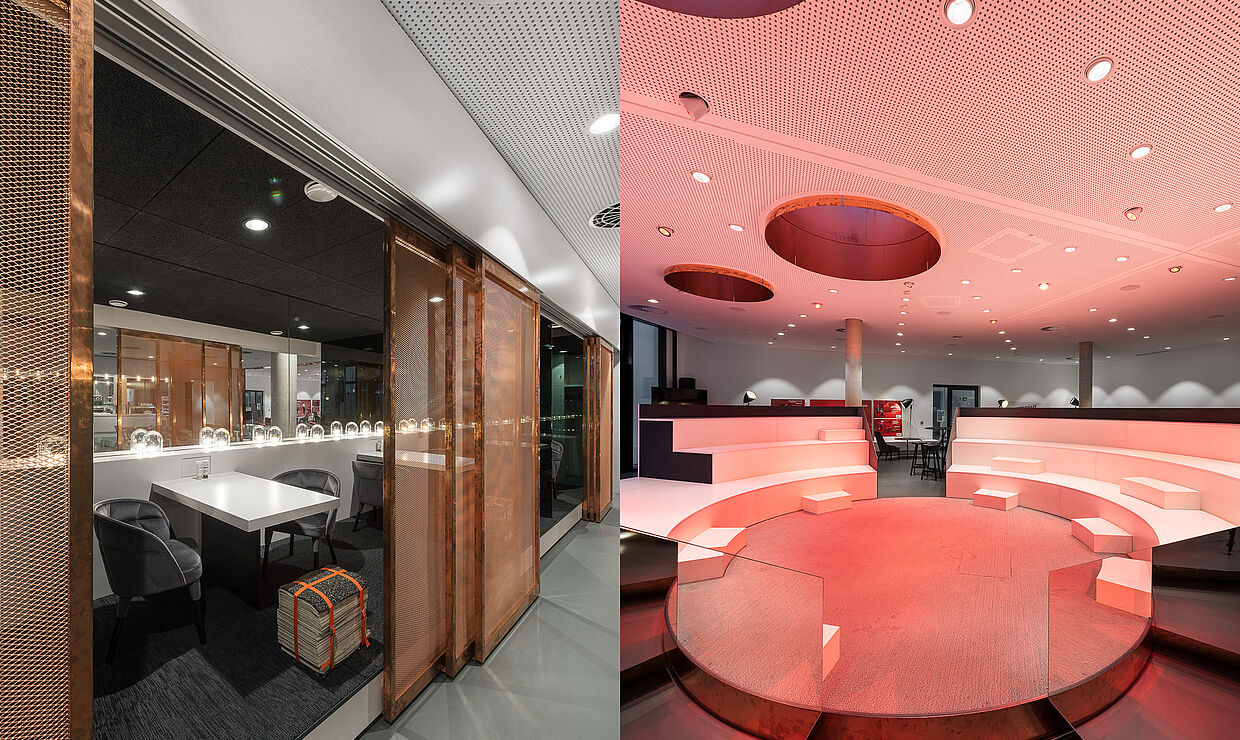 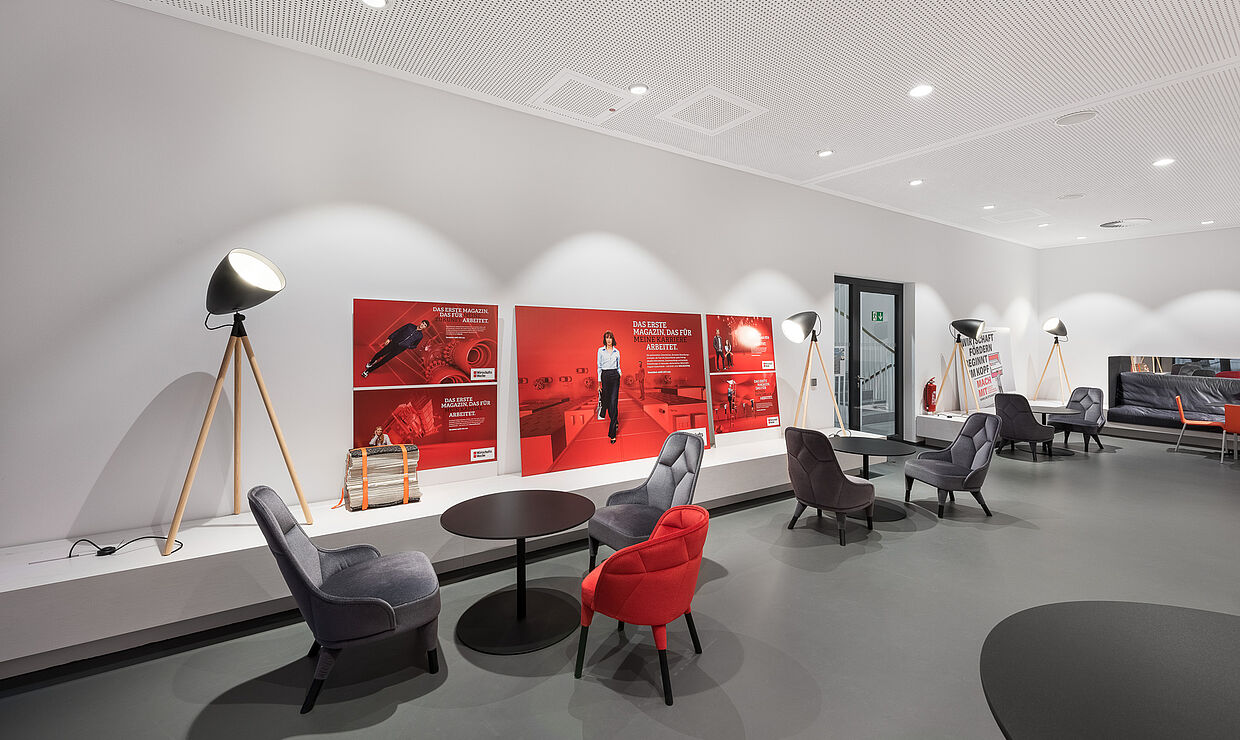 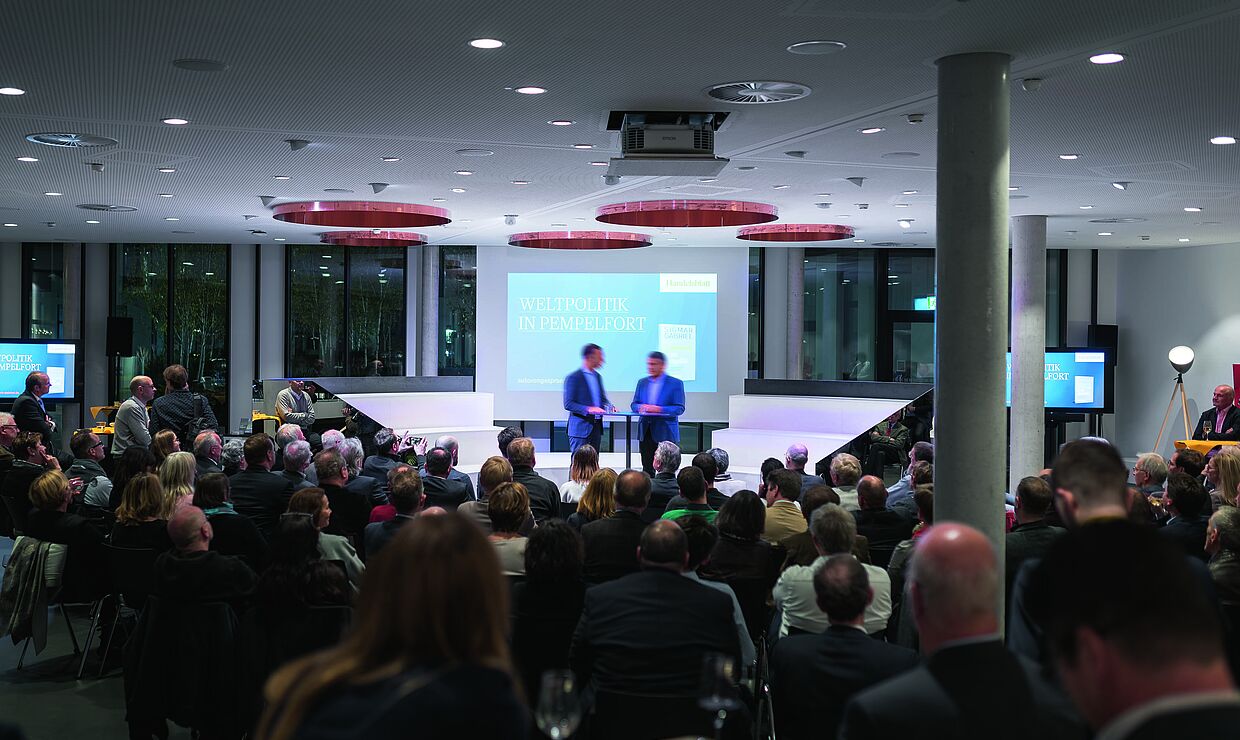 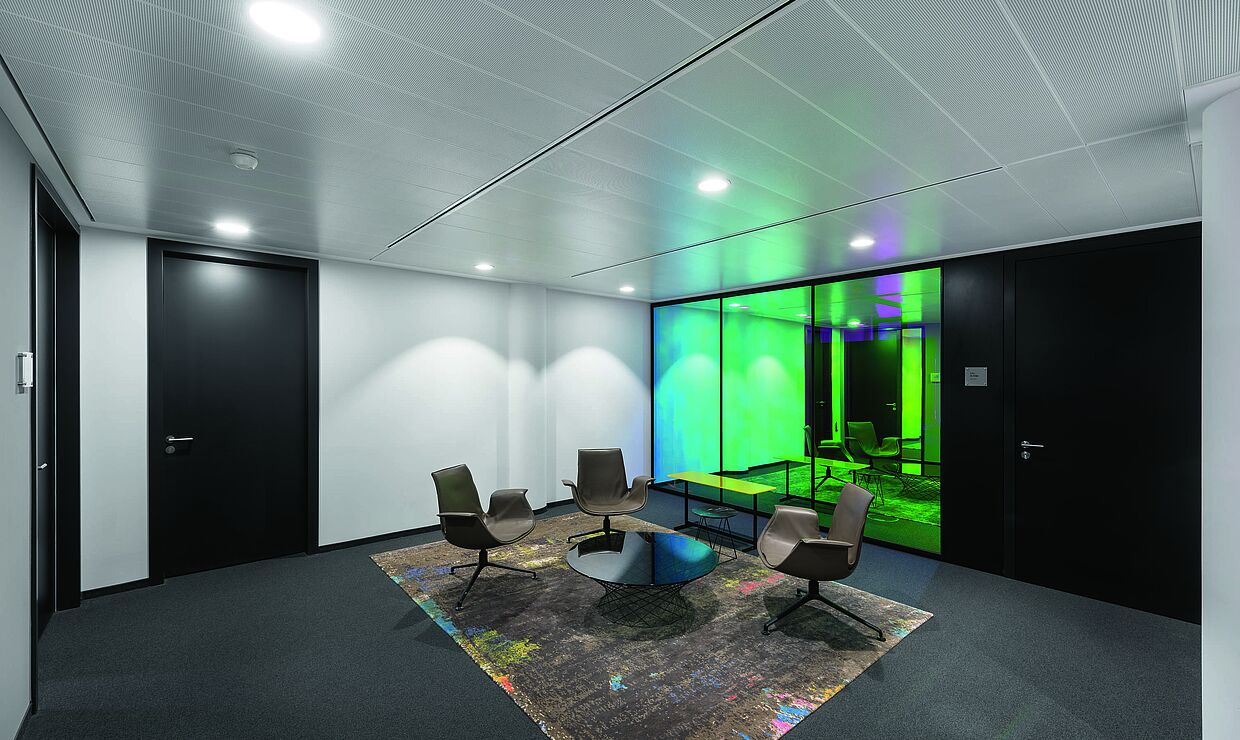 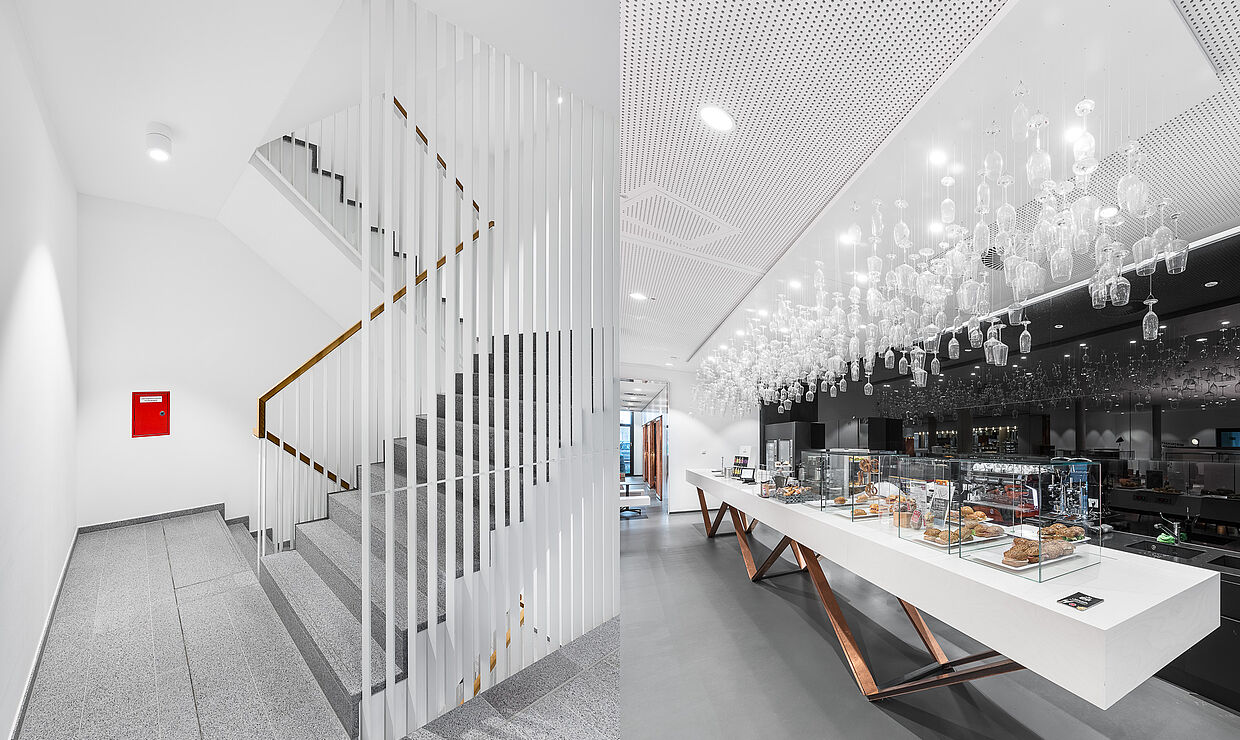 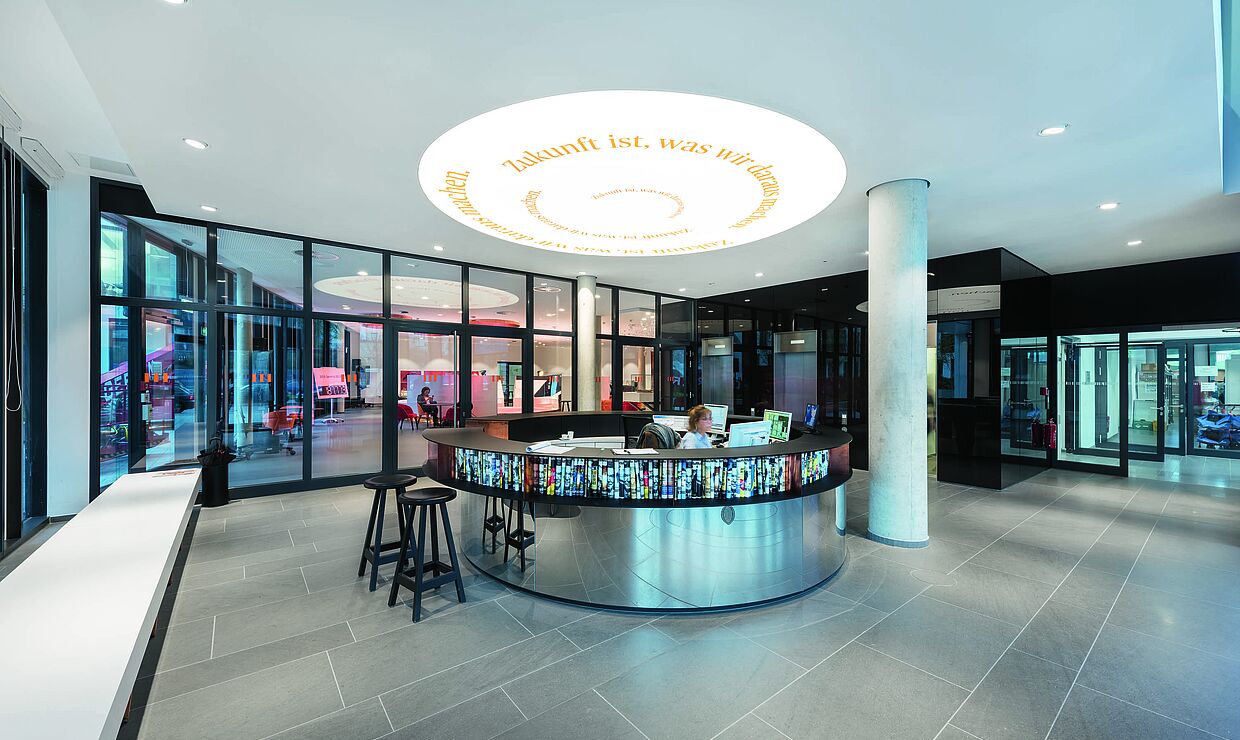 Along with traditional printing products and digital media, the Handelsblatt Media Group also offers live journalism in the form of prestigious events. Such events also occur several times a week at the Town Hall of the new Düsseldorf headquarters. The adjoining restaurant caters to guests and is also designed to be a place of interaction for employees, who are now finally all working under one roof. Most notably, the convenient colour modifiable light atmosphere is furnished by downlights from Regent Lighting.

In the place where the freight depot used to be in Düsseldorf, there is now a new city district in high architectural quality: Le Quartier Central. Situated in a prime location, the seven-story office building named “La Tête” (French for head) has been attracting attention – through its façade, which is reminiscent of a bar code. Since the beginning of 2018 the Handelsblatt Media Group has taken up residence in the light-suffused rooms of La Tête, currently there are 1,000 employees. The editorial departments of Handelsblatt and Wirtschaftswoche as well as the administration and some subsidiaries have finally all been brought together under one roof in the new publishing house.

The wishes of the main tenant were implemented in the interior design of the office complex. Special features include a spacious foyer as well state of the art communications and conference rooms – in particular the Town Hall with a seating area, café-bar and an adjoining restaurant. The robot Pepper represents the innovative spirit of the media house, greeting guests in the foyer. He shows floor plans, tells jokes or does Tai Chi exercises. Person to person contact is available at the round meeting point. An illuminated ceiling traverses this – a custom design of Regent Lighting in cooperation with Rentex Lichtdecken. The illuminated ceiling spots the following optimistic motto: “The future is what we make of it” as a symbol for the digital transformation with a look forward.

A new logo reflects the digital transition of the enterprise with the three pillars: Print, Digital and Live. Within the scope of live journalism, the media house offers high profile event formats through Germany. To this end, the Town Hall in the Düsseldorf headquarters is used several times a week. The pivotal element is the so-called Forum in the form of an amphitheatre. When compressed, this multifunctional seating arena can be used for smaller meetings and in an expanded state it offers space for large events. The rear of the room is a restaurant for employees and guests.

“Our objective was tailored communications rooms with a clear overall radiance, in which personal interaction takes centre stage and which reflects the brand personality of the Handelsblatt Media Group” explains Claudia de Bruyn, owner of two_space + product, an interior designer who is also in charge of lighting design. The basic illumination occurs mainly through downlights from Regent Lighting, which integrate well into the ceiling structure. Wide-angle surface-mounted luminaires Rea LED (4,000 kelvin) in a timeless, clear design guarantee outstanding light quality, high energy efficiency and long service life. Carda LED Competence gimbal recessed spotlights perform their magic – also in neutral white – light effects on the wall. The Poco System PAL+ makes it possible to change the colour temperature from 2,500 to 6,500 kelvin based on genuine white LED. The colour rendering and colour temperature remain constant with PAL+ in the dimming range of 20 to 100%. Additional RGB-LED in the luminaires enable coloured light effects. The colour atmosphere can be easily controlled via iPad, for example a red lighting mood appropriate for the corporate colour of red at an event for the Wirtschaftswoche.

In the hallways of the office floors, which can also be used for consulting areas there are Medra LED recessed downlights (4,000 kelvin) with a low installation depth of only 60 mm. The absolutely homogeneous illumination of the diffusers ensures an optimum glare-free light distribution and a uniform appearance. The restrooms are equipped with Tekla LED in puristic design.
Projektübersichtfile, 14,3 MB
Used products
To overview
Are you planning a similar project just now?Just contact us, we'll be glad to answer your questions.