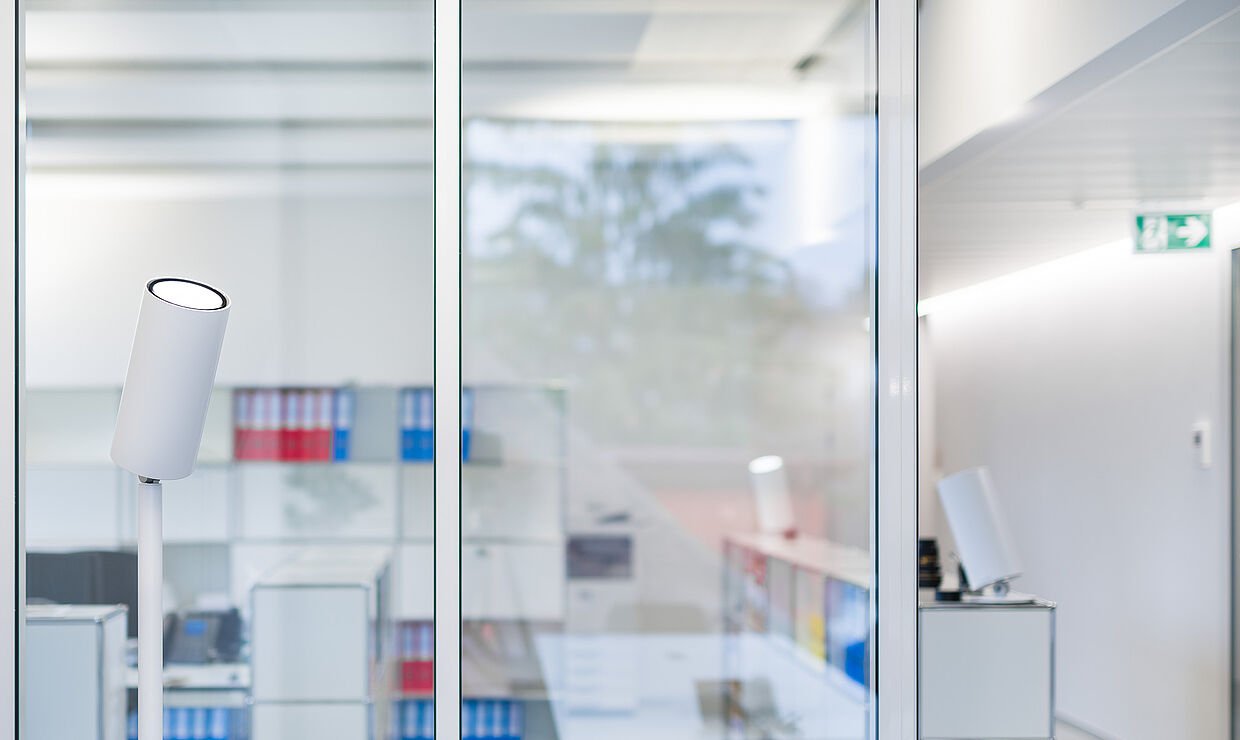 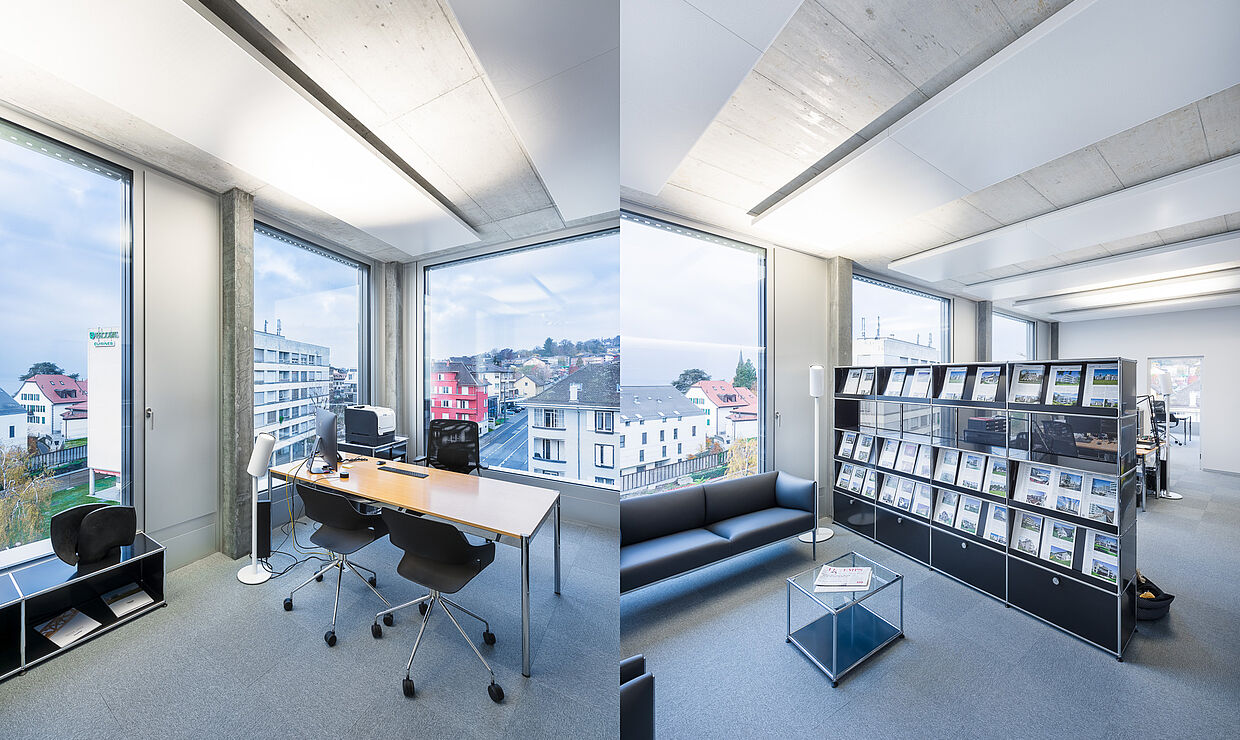 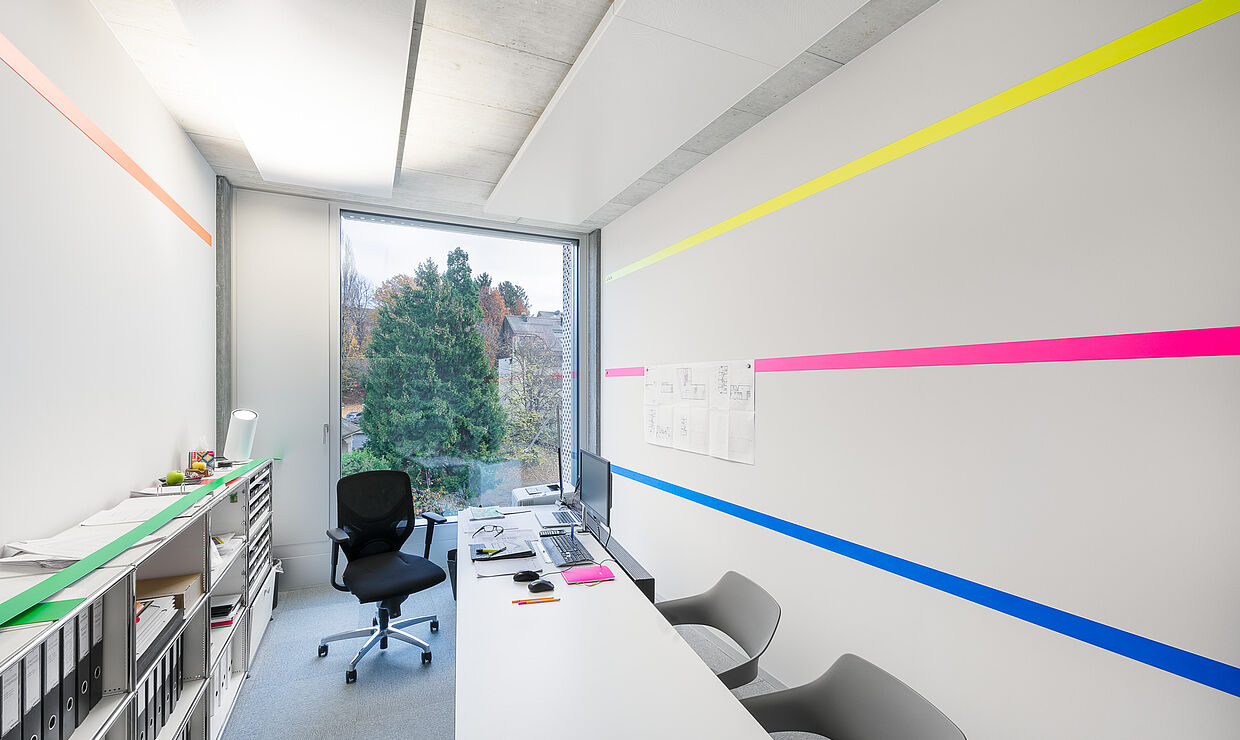 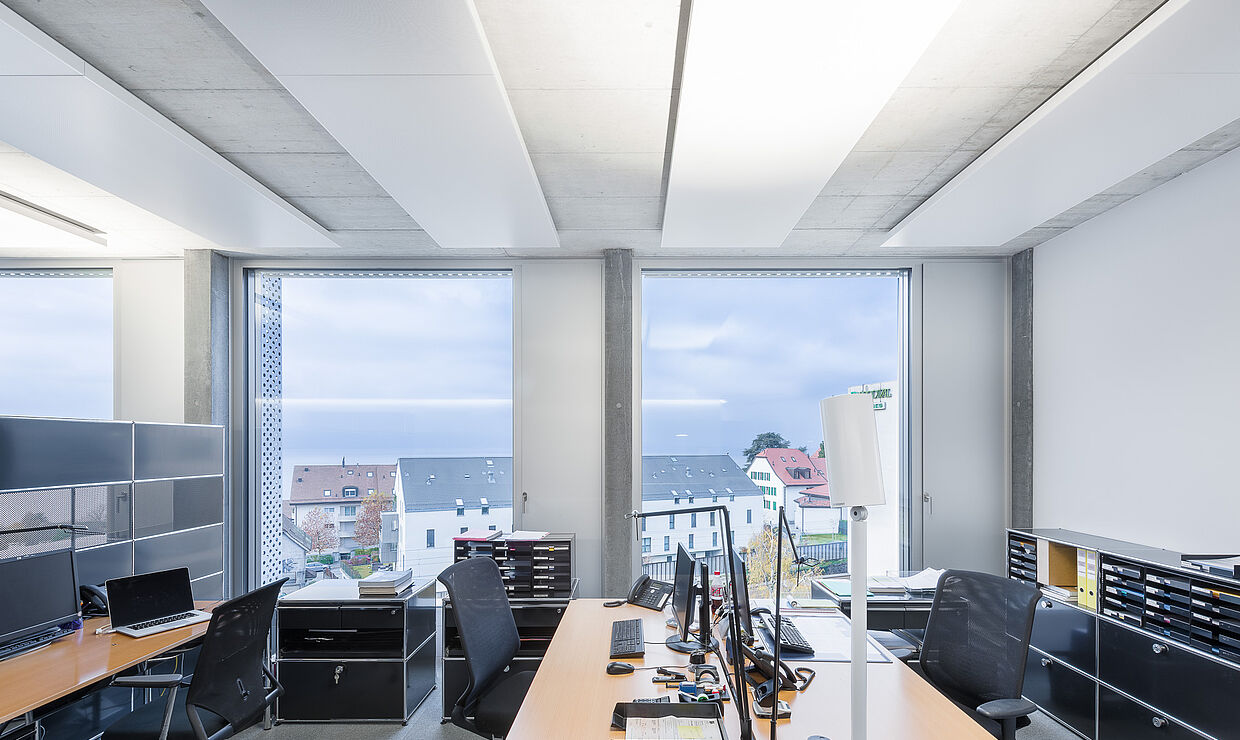 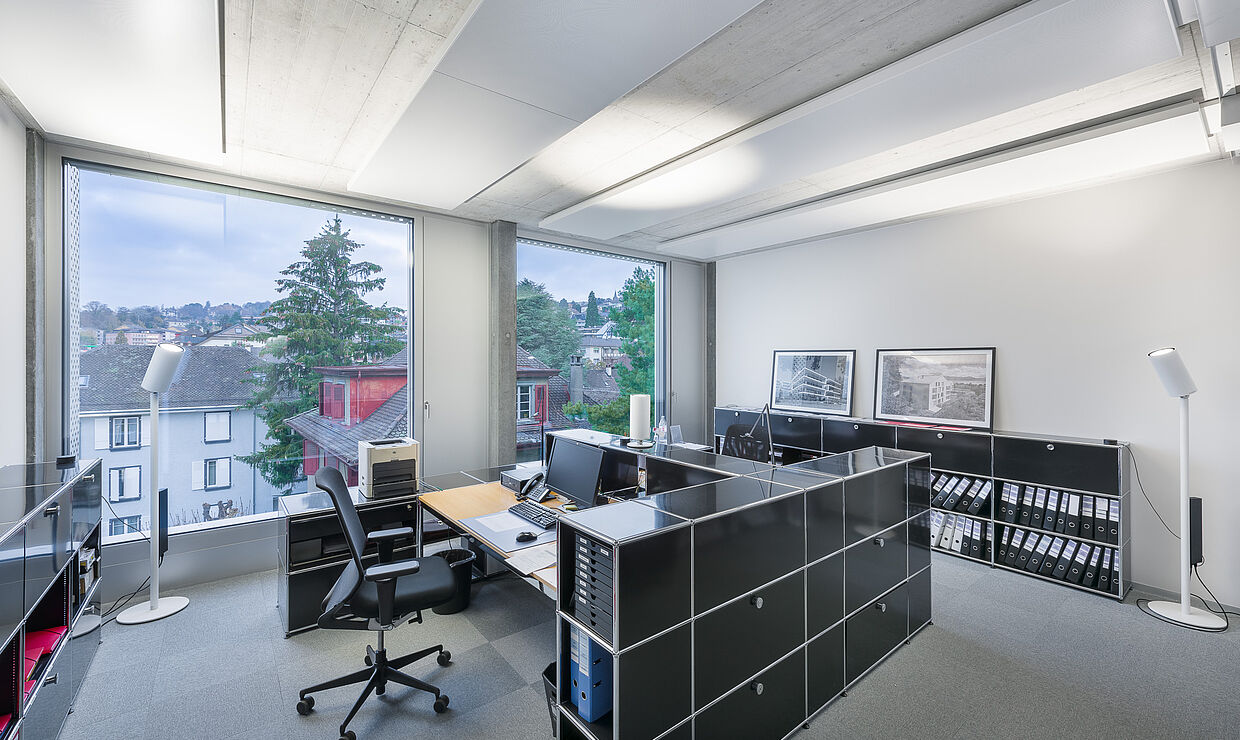 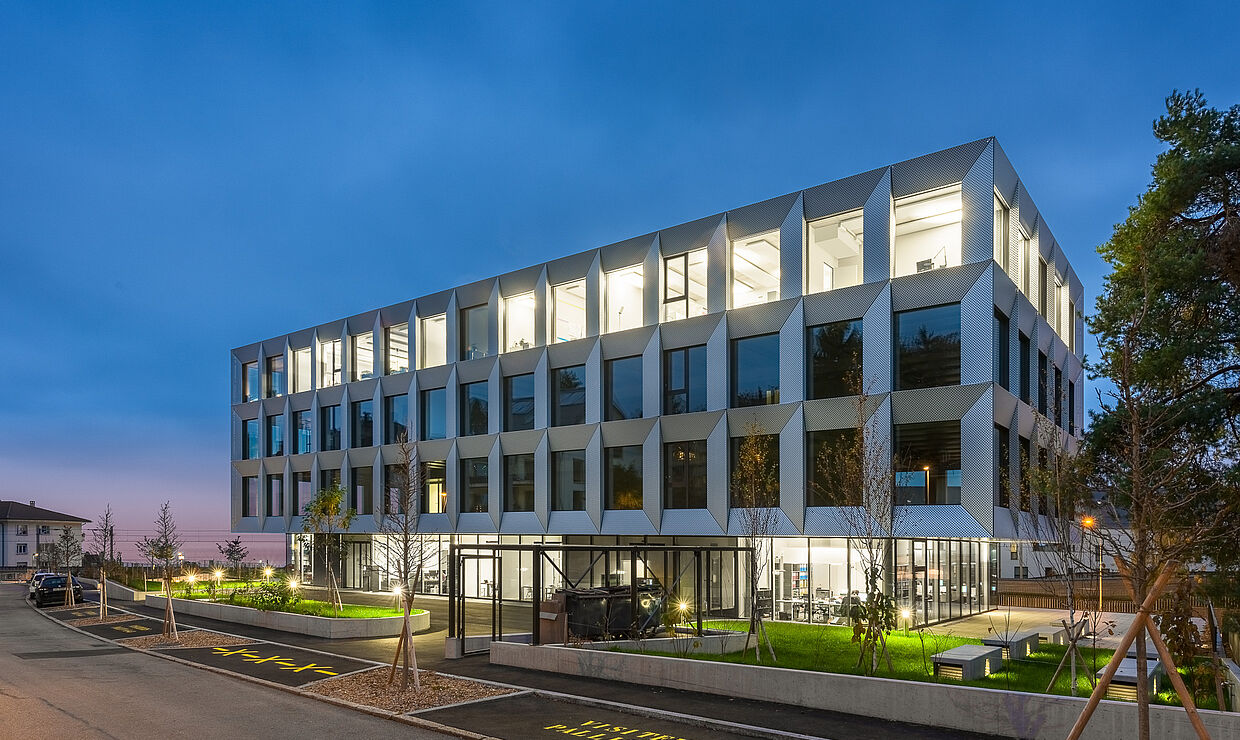 The free-standing office building on the Chemin de Pallin in Pully was designed by CCHE Architekten of Lausanne and opened in 2018 following a two-year construction period. On the ground floor and on the 3 upper floors it offers modern office space with large window areas.
The property developer Chappuis & Delarive and its subsidiary for construction project management, Maitrimo, moved into the top floor in July 2018. There is sufficient space for both company areas. The two offices differ at first glance in the choice of furniture colour: one side was designed in white, the other in black. Each area has its own reception and waiting area and its own conference room.
The entire building core consists of concrete as do the ceilings, which are partly covered by heating and ventilation elements. "Ceiling luminaires would spoil the character of these ceilings and make them look overloaded. That's why we actually wanted to choose flexible lighting with freestanding luminaires. But then we discovered Stream and that was an entirely new concept that quite simply suits our office perfectly", says Dominico Caregnato, quantity surveyor at Chappuis & Delarive. Stream illuminates only through indirect light reflected from the ceiling. Chappuis & Delarive chose a combination of the tabletop version and the version with a short standpipe and placed them in all areas of the office.
"Stream supplies very homogeneous light, enabling extensive construction plans to be read very well under it. The luminaires unite high light quality with the flexibility of a freestanding luminaire", says Leonardo Barrios, project manager at Maitrimo.
A unique reflector technology creates a narrow cone of light that prevents people being dazzled when approaching the luminaire. The reflected light is sufficient to illuminate office spaces in compliance with standards.
Stream can be positioned anywhere in the room and is simply plugged into a power socket. A joint that can be swivelled by 25 degrees in both directions enables the luminaire to be directed perfectly towards the reflection surface, which therefore does not need to lie directly above the luminaire. The operating unit is housed in an equipment box with a magnetic housing, which is fastened discretely to the standpipe of the luminaire, to a desk leg or in the cable holder of the desk.
"What we have here is a building with lots of daylight. For ecological reasons, therefore, we have additionally installed the operating modules for the workstation", says Dominico Caregnato. Each Stream luminaire can be switched on and off and dimmed with a button integrated in the housing. In order to increase the operating convenience, the optionally available operating module for the workstation enables these functions to be operated conveniently from the workstation. It also features a sensor for presence and daylight control that switches the luminaire off if the workstation is vacant and adapts the luminous flux and thus also the power consumption of the luminaire to the current lighting conditions.
Stream impresses through the use of high-quality materials and its beautiful design, which has already won numerous design awards. In rooms the luminaires retreat discretely into the background, creating a new feeling of space and thus enabling a view of the essentials.
Projektübersichtfile, 0,7 MB
Used products
To overview
Are you planning a similar project just now?Just contact us, we'll be glad to answer your questions.